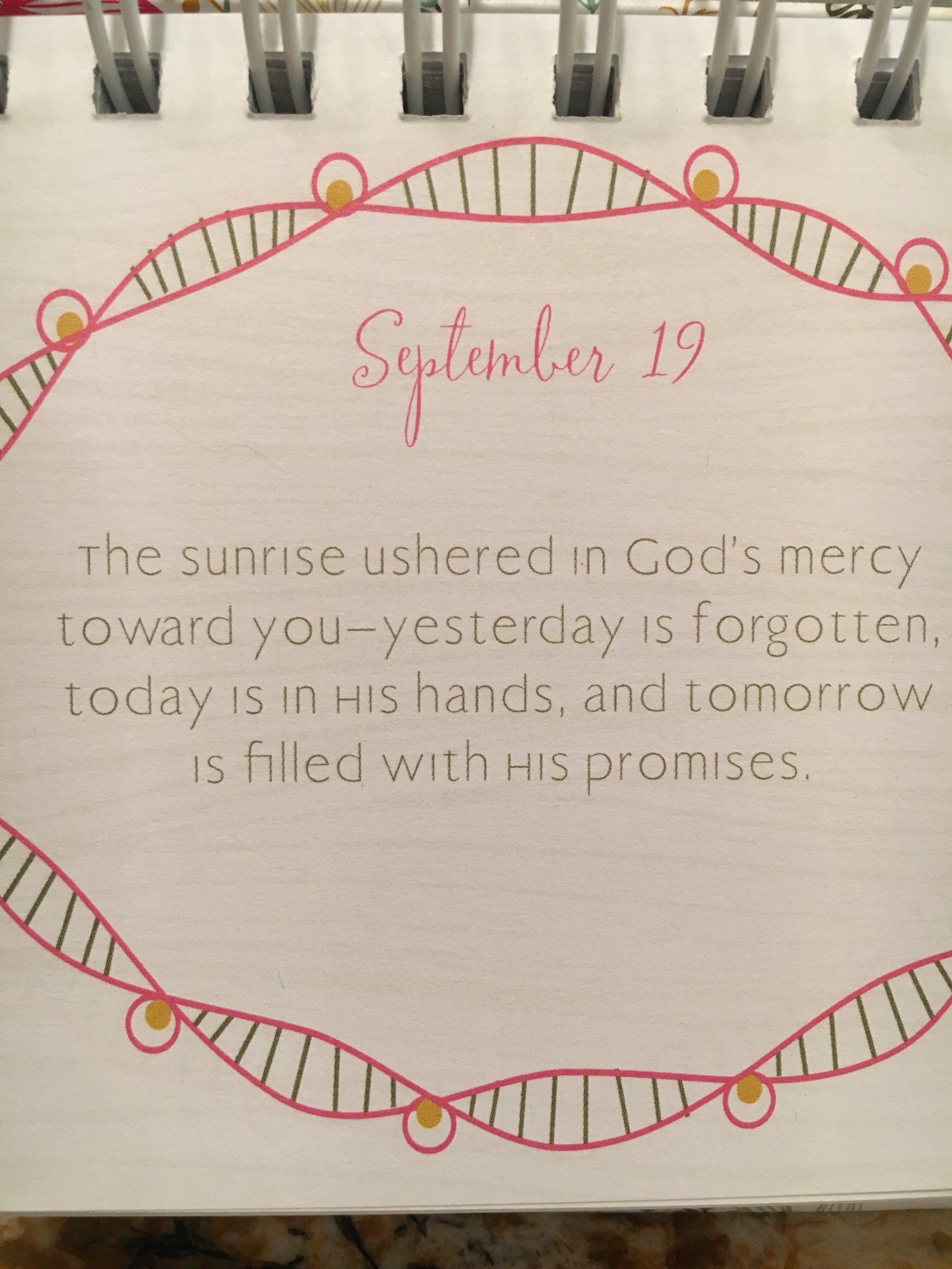 I have this daily flip calendar called God in Every Moment by Bonnie Rickner Jensen.  It says it’s “An Inspirational Dayspring Daybrightener”.  That is for sure correct.  This year it has gotten me through some difficult waiting periods with grace and love.  I always go to get my cup of coffee and that’s where my calendar sits.  Today this was the page I flipped to.  Sometimes if it’s not obvious to me that it was “meant for me”, I talk to God asking who will need the inspiration.  I have been known to point it out to one of my children if it fits whatever they are experiencing that day.

Parenting is NOT easy.  My feeling is that it doesn’t get easier as time goes by.  It just is different.   I remember distinctly feeling like I can’t wait for this infant stage to be done.  Then I couldn’t wait for the toddler/preschool stage to be done.  Then they got to school age.  Then suddenly they reach about 6th and 7th grades and they are super sweet!  If you can get past the awful puberty – it’s like finally you have these little adults in front of you that are eager to engage in more meaningful adult conversations.  But the waters get muddy here.  Because while they are trying to experience some independence from you as parents, they are all of a sudden confronted with adult choices of drugs, alcohol, tobacco, navigating school work, and being put in dramatic social situations.  Learning to be an adult….it’s not easy.

Fast forward now to the fact that I have two children in high school.  One a girl with a fall birthday which makes her one of the oldest kids in her class.  She will turn 16 and get her drivers license sometime fall/winter of her sophomore year of school.  I also have a boy with a summer birthday which makes him one of the the youngest kids in his class.  He will turn 16 late summer and will be lucky to get his drivers license a few weeks before school starts his junior year.  Two very different kids with very different experiences during years of school.

As parents, my husband and I aren’t always the quickest with figuring out how to navigate new waters.  Often we find ourselves knee deep in the muck, realizing we are on opposite sides, trying to provide our kids with discipline or direction.  It’s hard.   Last year was the start of my daughter’s freshman year of high school.  Low and behold there was a semi-formal homecoming dance.  Wait…had we talked about dating prior to this?  Vaguely and in small snippets we did; knowing it would arise, but we were caught off guard with the timing.  We held fast to the rule of you need to be 16 before you can have a boyfriend or girlfriend but we will make an exception and let you go to a dance if you are in a group of friends.  This was easy, as girls don’t need dates to go to the dance – they just go with a group of girlfriends.

This year is a bit different.  Boys don’t go to the homecoming dance with a group of friends.  Boys only go if they have a date.  He told us that he would like to go to the dance.  He would like to ask a particular girl.  However the “group” would be two couples.  My husband does not cave like I do.  So it’s been this dance between how can he find a group to go with that we approve of and just telling him no you can’t go at all.  Parenting is hard.  I was the girl with an August birthday.  I was the youngest in my class.  I didn’t turn 16 until a few weeks before my junior year.  Where everyone else could date, drive cars, do adult things (in my eyes) WAY before me – I had to wait.  That is the part of me that wants to make an exception for my son.  But I need to stick behind my husband when he feels so passionately about protecting our children.  He can see what’s important, where I revert back to my emotions of being in high school.  My emotions of things of this world that aren’t important, but seem so monumental in the moment.

Last night my son, oldest daughter, and I were talking while they did homework.  All the while they both are listening to music on their earphones.  My son decided to play a song for us out loud because he liked it so much.  His music of choice is christian rap.  He loves listening to Lecrae.  He told us that he just didn’t understand why people like mainstream rap music.  That most of the time you cannot understand what they are saying except for all of the swear words.  That with Lecrae you can understand the words and that it has a great message.  Wow!

That’s when I told him there would definitely be opportunities for small talk if you went to the dance.  What would he say when a girl asked him what his favorite music was?  He didn’t know.  His sister chimed in to tell me the answer I wanted to hear.  I said no.  I wanted him to tell the truth.  I asked if he would be able to tell her that his favorite music was christian rap?  He said no probably not.  That if things went well and he got to know her better, then he would tell her.  I then said, well if this was a girl you liked, wouldn’t you want her to like you for who you are right now vs. later.  That if she wouldn’t like you for your music choice would it matter that you’ve had a few “dates” first?  He said well now that you say it that way I probably would tell her right away.  My daughter rolled her eyes at us.  I explained that this was real life.  That both of them were going to be confronted with questions just like this sooner then later.  That it’s okay that my son can discuss hypotheticals with me first to figure out how to respond later.

It made me recall when my oldest daughter joined the high school swim team in seventh grade.  They went on an overnight retreat after the first week of practice in the summer. They were given a one page questionnaire they had to fill out so they could get to know each other better while they were there.   One of the questions was “who is your favorite singer”?  She left it blank.  I asked her why, since there were lots of artists she liked to listen to.  Most of them were christian artists and she wasn’t comfortable telling the group that.

Parenting is hard.  Navigating high school and relationships is hard.  But being true to your faith life can also be hard.  My kids have my husband and I to talk to, but adding faith to the mix of growing up is still hard.  I have some close believing friends and my small group to talk to, but when confronted with a group of people I don’t know, I sometimes freeze.  But what about others that may not have someone to talk to?  How do they stay true to their faith?

We live in a world of little white lies.  I’m pretty sure we learn that at a young age.  In my experience little white lies sometimes have a way of turning in to be huge ones.  If there is one thing I want to help my children develop before I have to let them out into the world, it would be confidence in themselves.  Confidence in who they are and not to sacrifice or pretend to be someone else depending on the group they are in.  To be confident in the fact that they have chosen a life of faith and to not be embarrassed by it. That it’s okay to want to go to church or read the bible or listen to christian music.  If someone doesn’t like our true self then they aren’t the person (or people) that God has planned for us to marry or be close friends with.

Through it all….marriage, parenting, relationships, or any part of this messy world, we must remember that God provides you a sunrise EVERY morning.  That the sunrise can remind each of us that yesterday is forgotten and today is in His hands.  That is super good news for me.  When I freeze and momentarily feel uncomfortable sharing my faith.  When someone judges me harshly for my beliefs and so I revert inward.  When someone uses my faith as a way to throw back something in my face and I feel less then.  I will turn around and be honest in my heartfelt prayers and will be grateful for tomorrow to start again.

Every day I will strive to be more honest in my faith and more honest in all areas of my life.  Because “tomorrow is filled with His promises”….AMEN!